I’m currently on a project with rotating weeks living in hotels, so optimizing the travel kit got pushed up the priority queue and I’ve found a few new tools to add to the kit which get rid of a lot of extra overhead.

My usual travel computing is provided by a MacBook Pro and an iPad Pro. The nice thing about this is that they both use USB-C for charging. But of course travelling with two regular chargers is a pain, both from a size perspective and the requirement for finding individual plugs for each charger. We are finally seeing some chargers with multiple USB-C ports, and some that even have decent power profiles that allow high speed charging.

Since in all cases, I will be travelling with a charger in the computer bag, I’ve replaced the standard single port one with the Satechi 2 Dual-C charger which means that at any moment, I can be charging both devices at a decent speed and still have two available USB-A ports for other things. To top it off, it’s practically the same size as a standard Apple 60W charger. I am also waiting on the HyperJuice Kickstarter which is a smaller and more powerful version of the Satechi Charger which will shave off a few grams and cubic centimeters in my small bag.

Which brings me to the cable question. Since the world is still not fully USB-C, it’s been a mess of Micro-USB and Lightning and having to plug things into the MacBook or take along a separate Anker Multi-port charger which was the historical travel workhorse.

I’ve been trying to find robust cables with multiple tips, so that I don’t need to have the current mix of Micro-B and Lightning cables taking up space, but almost all of them are only available in 1m or longer cables which take up way too much space in an already exploding travel kit.

Then I ran across these nice little 30cm multiprong cables that are even better than the ones with the multiple tips since they can actually charge (granted more slowly) multiple devices simultaneously. At the office, this allows for topping up the mobile 4G router (not that this one needs the help too often), an iPhone and whatever else needs a micro-USB cable and I still have another port free on the charger.

Curiously, the 30cm (1 foot) version doesn’t seem to be available on Amazon.com, but there are a ton of longer variants if you poke around a bit.

For the evenings at the hotel, I’m happy to report the recent arrival of the ZeroLemon charging station from another Kickstarter campaign that takes all of the advantages of the Satechi in a desktop style charging point which adds two additional wireless charging points and higher power charging. One Qi point for the iPhone and most importantly a charging point for my Apple Watch!

So out of the box I can ensure that both the MacBook and iPad are charging overnight, along with the iPhone and Watch. Adding in the multiprong cables, I get my AirPods, a PS4 controller for playing Apple Arcade games and my Oura Ring charger on one cable and a second for charging the NightHawk, Plantronics headset or an external battery and I still have a Lightning port left over. 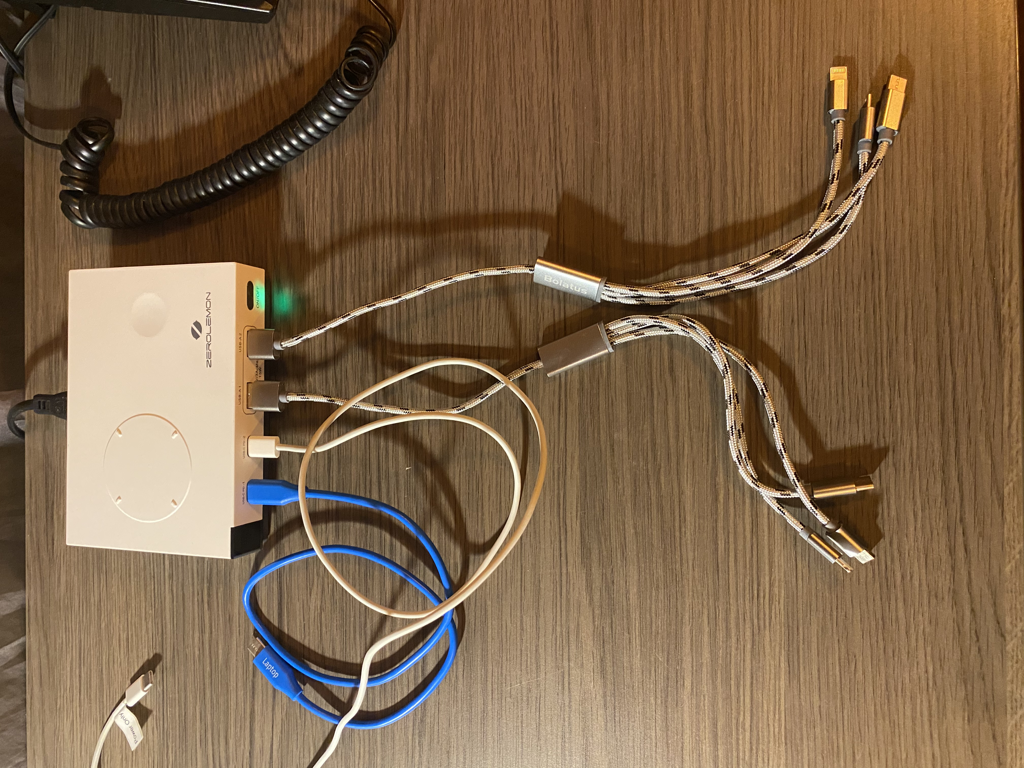 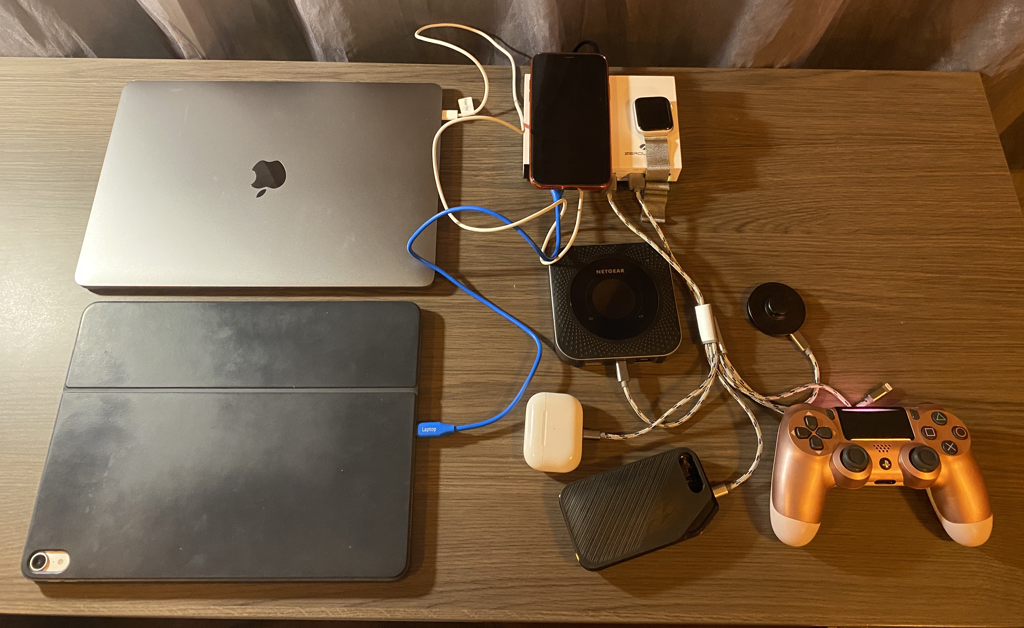 And all of this fits into the same little travel case I used with previous configurations, so it just lives in the suitcase, ready to go at a moment’s notice.

The only drawback is that the Apple Watch charging point is flush to the surface so it’s not compatible with the metal loop style watch bands. The sport loops are sufficiently supple that you can turn them inside out, but this means I’ll have to switch bands while travelling or open one side of the band to let it charge.

Noise? This much power does mean that the potential heat generated requires that the charger has fans. Now that I’ve done my first road test with everything plugged in there is a very very quiet pulsing fan noise coming from the box but it’s barely audible and I (with my old ears) can’t hear once I’m more than about a meter away.

Note: some Amazon affiliate links in the article.